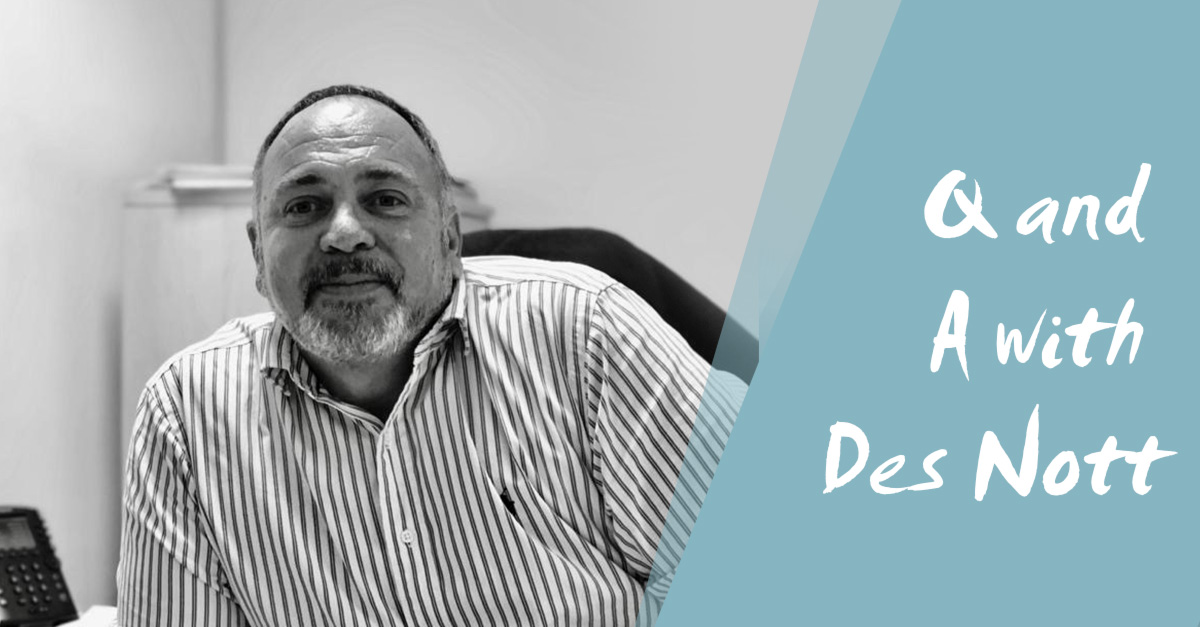 Des is a cherished member of the Kestrel team. An expert in the shipping industry with over 21 years of experience under his belt, Des works on some of the most complex breakbulk, RoRo and heavy lift projects globally. A recent project has been shortlisted for 2019’s Lloyd’s Loading List Global Freight Awards, in strong contention to win the ‘Project Forwarding Award’.

What did you do before starting work in the shipping industry?

I went to sea in Australia to start commercial fishing when I was just 14 and did various work before driving a charter boat for parties and island cruises off the West Coast of Australia.

I’m actually English by birth, born in Chelsea. After moving to Australia when I was younger, I came over to England for a holiday on some business after restoring a couple of old cars with the view to drive one across Europe. Well, they were delayed, so in the meantime I met the girl, then the anchor was finally dropped here in England.

When did you begin working in shipping?

My background in the industry starts when I got to England 23 years ago. I began working at the Port of Felixstowe as my first job, I was a ‘Stevedore’ (The person who puts their hands on the cargo, loads it and secures it to the ship). After that, I was trained as a crane driver, but I any good at it. The cranes are around 60-metres high and you’d be picking up a 12-metre box and lifting onto a ship… it’s a real gift to be able to operate one!

After, I became a terminal planner, then I started working for a shipping line, becoming a ship manager running three ships and operations between Europe, USA, French Polynesia, New Zealand, Australia, Far East, Indian Subcontinent, Egypt and the Mediterranean before return to Europe. As, before working on the large Europe to Far East container ships. As shipping lines do come and go, so eventually with my operational understanding, I found myself getting into project cargo management.

You specialise in larger heavy-lift projects, can you give us a little more insight into what is involved?

My job requires specialist attention which can only really be achieved after so many years in the industry. Mel (my colleague) and I have around 40 years of experience between us in the business, there’s not a lot we haven’t seen or done. We’ve transported machinery, aircrafts, high value yachts, you name it.

We have one job coming up where we will have to organise transportation of some exceptionally large cargo. Six of the pieces are 100 metres long, 7 metres high and weighs 400 tonnes.

We’ve just finished delivering and installing two large aircraft fuselage's In Tokyo and a smaller one just installed in Fiji Sadly, I didn’t get to attend that one!

You have the opportunity to travel a lot with work, but where is your favourite place in the world?

My house, sitting in the hot tub in the back garden with my wife and a glass of wine.

You were born in the UK but sport a fantastic Australian accent. Which side are you on when it comes down to sport?

In rugby, I support England. But in the cricket, I have to support Australia. Cricket’s my game and I played at a fairly good level in Aus. I’ve only recently retired as I played locally for many, many years.

What makes Kestrel different to other companies you have worked for?

Kestrel have a completely different outlook. Other companies are generally very UK based and focused, Kestrel on the other hand have a global outlook. It’s much more interesting, with a huge variety of interesting clients. It’s a lot more fun, there’s also a lot more toys to play with! In the two years I’ve been here, I’ve enjoyed every minute and look forward to the future.